There are no reliable population figures for Ireland before 1841, however estimates (often based on Hearth Money Returns) have been carried as far back as 1700. These figures show that Ireland's population rose slowly from around 3 million in 1700 until the last half of the 18th century when it had reached 4 million. The increase in the population was not smooth during this century, having reached 3.25 million by 1740, the famine at that time wiped out 400,000 people, or about 1 in 8 of the entire population. The population then continued to increase till it reached around 4 million by 1800.

It then entered a rapid period of increase (around 1.6% per annum) which appears to have slowed to 0.6% by 1830. By 1841, the population had reached 8.2 million (according to the census, but the actual figure may be nearer 8.5 million). The population would probably have reached a value of 9 million had it not been for the famine that began in 1845. The following graph shows Ireland's population since 1100. 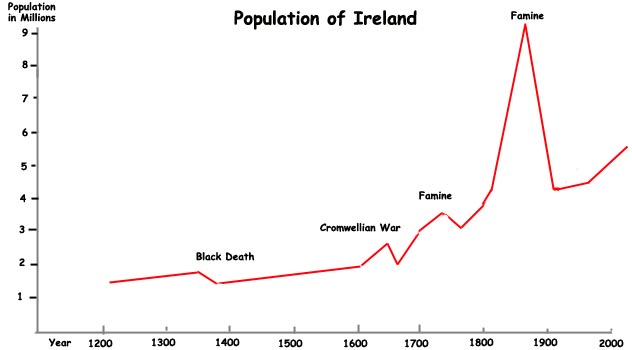 Emigration has been a feature of Irish history more than almost any other country in the world. This is shown by the fact that, apart from the 5 million people in Ireland, there are an estimated 55 million people worldwide who can trace their ancestry back to Ireland. Although the most awesome levels of emigration were to occur during and immediately after the famine, it would be a mistake to think that emigration began in 1845. In fact, there had been mass emigration from Ireland long before the famine. In this period, the Irish accounted for a third of all voluntary traffic across the Atlantic. These emigrants were mainly from Ulster and Leinster, with fewer coming from the poorer areas of Connaught and Munster.

Between 1815 and 1845, 1.5 million Irish emigrated, mainly to Britain (c.0.5 million) and to North America (c.1 million). Of those who went to North America, the majority settled in Canada. Between 1825 and 1830, 128,200 Irish emigrated to North America, 61% of which went to Canada and 39% to the USA. In the decade 1831 to 1840, 437,800 Irish emigrated (almost double the number of the previous decade). Of these, 60% went to Canada and 39% to the USA. The remaining 1% went to Australia. (Note that these figures are for emigration outside the UK only. They do not include emigrations to Britain.) Irish emigration to Australia was to rise over the next 40 years, reaching a peak of 11% of all emigration in the 1870s. Emigration to Canada was to fall sharply after the famine and soon the USA would be the dominant destination. This was all in the future, however. The Great Famine was to happen first.

It was in 1846 that the first starvations started to happen.

In 1847, the harvest improved somewhat and the potato crop was partially successful. However, there was a relapse in 1848 and 1849 causing a second period of famine. In this period, disease was spreading which, in the end, killed more people than starvation did. The worst period of disease was 1849 when Cholera struck. Those worst affected were the very young and very old. In 1850 the harvest was better and after that the blight never struck on the same scale again.

The precise number of people who died is perhaps the most keenly studied aspect of the famine: unfortunately, this is often for political rather than historical reasons. The only hard data that has survived is the 1841 and 1851 censuses, but the accuracy of these has been questioned. The reason for this is that the censuses recorded deaths by asking how many family members died in the past 10 years, but after the famine whole families had often left Ireland thus leaving many deaths unreported. It was argued by Edwards et al. that the precise number of deaths is of secondary concern to simple fact that a very many people died. Suffice it to say that estimates of deaths in the famine years range from 290,000 to 1,500,000 with the true figure probably lying somewhere around 1,000,000, or 12% of the population. We shall probably never know exactly how many lost their lives. It was undoubtedly the greatest period of death in Irish history, but its long term effects were to involve even more people than this.

In the years after the famine, scientists discovered that the blight was, in fact, caused by a fungus, and they managed to isolate it. They named it Phytophthora Infestans. However it was not until 1882, almost 40 years after the famine, that scientists discovered a cure for Phytophthora Infestans: a solution of copper sulphate sprayed before the fungus had gained root. At the time of the famine there was nothing that farmers could do to save their crop.