Robert Thomas was born in Clynnogfawr, Caernarvon in 1809. He appears to have moved in his teens to work in the slate quarries of Llanddeiniolen. He married Ellen Hughes in 1834, and they raised a family at Llanddeiniolen. Robert died in his 40s, His wife Ellen lived on another 20 years after his death.

IGS gives a Robert Thomas baptised 29 Oct 1809 at Clynnogfawr, Caernarvon, born to Thomas Pritchard and wife Mary. This is using the Welsh patrimony naming system which uses the father's Christian name (the custom changed in this parish in 1810 to the modern naming )

And so later we get Richard Prichard Christened 11 Mar 1814 Clynnogfawr, Caernarvon, to Thomas Pritchard and wife Mary Roberts. These are the only two births recorded to them in the IGI

Clynog Fawr, often simply called "Clynnog", is a village on the north coast of the Llyn peninsula in Gwynedd, north-west Wales. Clynnog Fawr lies on the A499 road between Caernarvon and Pwllheli. It had a population of 130 in 1991. The main feature of the village is the church, dedicated to Saint Beuno, which is much larger than would be expected in a village of Clynnog's size. Clynnog Church is a remarkably fine example of Perpendicular work in a county where the architecture of the churches is in general anything but noteworthy. Adjoining the church, and connected with it by a covered passage, is the far more ancient church of Eglwys Beuno, where St Beuno was reputed to have been buried: it thus became a famous place of pilgrimage, and all kinds of astounding miracles are alleged to have been wrought by the magic power which emanated form the saint’s remains.

He married Ellin before the state records began. There is an IGS record of 11 April 1834 at Llanllyfni of Robert Thomas to Ellin Hughes which is almost certainly the marriage. I have the birth cert of John Thomas, which shows his mother to be Ellin Hughes. He went to work in the slate quarries at Llanddeiniolen, perhaps Dinorwic, and their first child was born in 1835 in Llanddeiniolen parish.

The LDS records show the following births in Llanddeiniolen, and these tie up with those in Robert's family in the 1841 census. 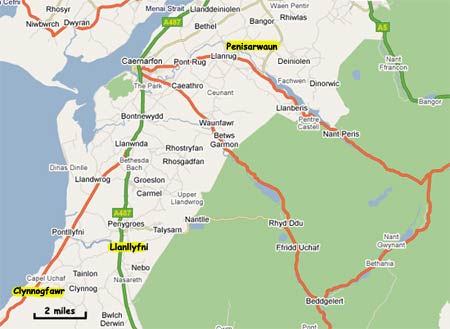 1861 census shows that Robert Thomas is now dead and that Ellinor Thomas 50 - late quarry man's widow is living at Blaen Afon, Llanddeiniolen with her children. There are too many deaths of Robert Thomas in the inter-census period for me yo be able to find his death.

1871 census Ellinor Thomas living alone at Blaen Afon, Llanddeiniolen is a "charwoman" and is dead by the next census