This Steedman family came from a few miles south west of the city of Perth, being tenant farmers in the area. William, born at Baulk of Struie in 1765, married and moved to Orwell, Milnathort, where he became a clockmaker. He married a Bathia Steedman, but I cannot find whether she was related. He died in 1823. His widow, who was 15 years younger, survived him by 30 years.

There are two extensive family trees available on the web. This one and this one both may be the same he pieces that I have been able to check on LDS and ScotlandsPeople are correct. In addition, I have a sketch of his own pedigree done by Rev John Steedman in 1856, which shows his father as William Steedman and mother as this Bathia Steedman. And which shows his grandfather as John Steedman, of whom he says held lands at Dunning Parish, Co. Perth.

There are 2 John Steedman baptised in Dunning at this time, plus one in Forteviot (Forteviot is about 3 miles from Dunning)

The birth of John to Laurence and Margaret Steedman would appear to be the correct one. When he has children, he calls his eldest Laurence. And when he returns to the area from Fossaway he returns to Forteviot Parish, not Dunning. It does show, whichever is correct, that this is the right area for the Steedman's origins.

John Steedman married (1) Margaret Ewing and (2) Elizabeth Hoggan on December 20, 1750 in Tulliebole, Kinross (daughter of James Hoggan and Margaret Kid) and they had their first two children there, before returning to Forteviot to complete the family. He died January 15, 1801 in Milnathort, Kinross, Scotland.

Children of John Steedman and Elizabeth Hoggan are: 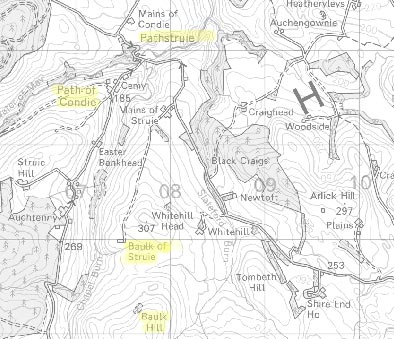 Pathstruie or Path of Condie Associate Church. Several parishioners of Forgandenny joined the Secession when it occurred in 1733. They joined with other seceders in neighboring parishes and sermon was supplied at Dunning until 1740 when it was withdrawn. In 1749 the Seceders in Forgandanny and Forteviot applied to the Synod to be again formed into a separate congregation, which was allowed. In 1758 they took possession of a place of worship which they had erected in the hamlet of Pathstruie, with seating for 380.

"Fossoway And Tulliebole, an united parish, chiefly in Perthshire, but partly in Kinross-shire, lying at the south-eastern and at the western verge of the counties. It contains the post-office station of Fossoway, the post-office village of Blairingone, and the villages of Crook-of-Devon and Gartwhinzean. It is bounded on the north by Dunning; on the east by Orwell and Kinross; on the south by Cleish and Saline; on the west by Clackmannanshire; and on the north-west by Muckhart. Its greatest length is about 11 miles; its greatest breadth about 10 miles ... Population in 1831, 1,576; in 1861, 1,584." from the Imperial Gazetteer of Scotland, edited by John Marius Wilson, 1868.

Although his parents first two children were born where they married near Kinross, they had returned to his father's birth village by the time William was born. They appear to have been living at Pathstruie, 3 miles south east of Dunning, in Forteviot Parish. It would appear that he was a tenant at Baulk of Struie

1814 John Steedman was born 22 Feb 1814, (birth entry) son of William Steedman, clock and watch maker, in Milnathort, and Bathia his wife, and baptised the following Sabbath.

1823 Died 17 Sep 1823 Milnathort, Kinross-Shire, Scotland. As a clock maker, William Steedman b1765 had enough money to educate his children, given his son, and my descendent, John Steedman b1814, became a Presbyterian Minister at Stirling.

Information from chart on this web site